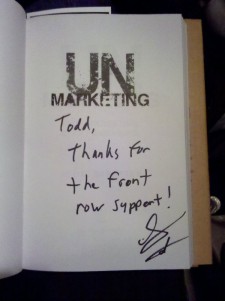 I wrote this a few weeks back because a friend asked for social media success stories. I hadn’t planned to post this here, but I was inspired to do so after listening to Scott Stratten at a book signing earlier this week. I’m not a social media “expert,” and I don’t play one on TV. (I don’t even watch TV.) Maybe somebody will get something from this, so here it is.

I took advantage of an unplanned week off in February 2009 to meet a friend at a tea shop on a late Thursday morning. I was working on a side project (long since put on hold) at the time, and I talked to my friend about it. Henry (@balanon) listened to what I was doing then said, “You should be on Twitter.”

I created my account a few minutes later. I took a Twitter class at InSights Group a few days after that. I learned about “@-replies,” RTs, #hashtags, how to connect my (non-smart) phone to my Twitter account, and how to use a few tools outside of Twitter.

I began by following the few people I knew on Twitter. Then I started following people my friends were talking with. Guess what? Some liked to complain, some were smart, some were funny, but they were all people. And they were interesting!

I broke away from the limitations of Twitter’s web interface and started using other tools (I still like TweetDeck).

I attended my first #Tweetup, and I was hooked. Here were people who wanted to make new friends.

I shared my newly acquired Twitter addiction with a friend. I sat down with her for a few minutes and showed her some of the things I had learned. She played with it, and a few days later she said, “I see why you like Twitter. There are all these people, and they’re right there, smiling at you!”

As of this writing (18 months after my first tweet), I follow 794 people and I have 1242 followers, but I don’t measure success by these numbers.

Twitter has changed my life. No, I didn’t gain 30,000 followers or become a millionaire, but my life is much richer for it.

How? Here are some ways that engaging people on Twitter has directly enhanced my life:

The friendships I have made have challenged my thinking, broadened my horizons, and stretched my limits.

Engage in conversation with other people. Read what they write, retweet things you find something funny, fantastic, or noteworthy, and reply to people. Jump into a conversation. People won’t bite.

If you haven’t tried it, give Twitter a chance. You might have to ask for help at first. That’s OK. I did. I don’t regret it.